“EveryBODY is beautiful” – Taryn Brumfitt

This morning, I came across a video and short testimony of a woman named Taryn Brumfitt. Her story really inspired me and I wanted to share it with you.

Taryn Brumfitt is an Australian mother of three beautiful children. She is the founder of the Body Image Movement. The reason that she started this movement is because, after all her pregnancies, she felt fat, ugly, unworthy and unattractive. These feelings are something that men and women alike can relate to.

Many of us feel unworthy or unattractive, especially when famous film stars, musicians or models set unrealistic standards. We are constantly confronted with these men and women on magazine covers, movies, television shows and social media. Hollywood has these scary, fast diets and intense exercise plans that help people to lose weight at extreme rates.

The whole idea that you need to be skinny, firm, lean or have killer abs to be beautiful have many of us “normal” people in tears when we stand in front of a mirror. Society sets these standards, and young girls and boys grow up believing that this is what they should strive for. It has become an obsession and sickness in many young women’s and men’s lives. 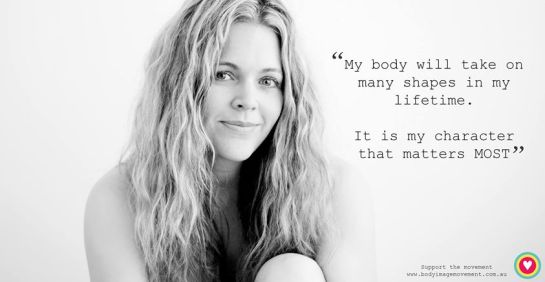 Before Taryn had children, she was a fit and beautiful woman who was confident enough to walk in a bikini in front of a panel of judges and hundreds of people. After Taryn’s third pregnancy, however, she wanted to go for plastic surgery. She felt ugly and unworthy. She lost her fit and lean body. Instead, she had excess fat, stretch marks, and saggy breasts. Everything that she once loved about her body was gone.

She decided she was going to have plastic surgery done on her breasts, and have a tummy tuck. Before she went for the surgery, she suddenly decided against it for this reason:

“If I go through with this, what am I saying to my daughter about body image? How will I teach her to love her body? How am I going to encourage her to accept and love her body, when I am standing in front of her with a surgically enhanced body? What type of hypocrite or mother would I be?” – Taryn Brumfitt

Taryn then decided to publish ‘before’ and ‘after’ photos of herself. These are not the type of photos that you normally see in a ‘before and after’ photo campaign. The ‘before’ photo is of her fit and firm younger self, while her ‘after’ photos are of her post-pregnancy body. She is embracing her body and her beauty as a woman, regardless of her tummy fat, stretch marks, saggy breasts and other body parts she hated.

Just like Taryn, many of us despise ourselves for the way we look. We spend endless hours obsessing about it, and as a result, we end up being genuinely unhappy with our lives. This was the main agenda behind Taryn’s Body Image Movement – to help women and men accept themselves and to stop thinking of themselves as disgusting or ugly.

Taryn Brumfitt is planning a documentary titled Embrace that will teach women to value themselves and break the unhealthy goals that they set for themselves, which are often derived from society and the rich and famous.

Taryn Brumfitt has really inspired me, because I am one of those women who stand in front of a mirror, insulting myself. We should all learn to embrace ourselves. Not just women, but men too. And in turn, we should teach the younger generations that rock hard abs and beautiful, lean bikini bodies are not the only things that make us beautiful. It is unhealthy to spend our days obsessing over our appearances. We are beautiful just the way we are. Embrace your beauty, and embrace yourself!

“To be yourself in a world that is constantly trying to make you something else is the greatest accomplishment.” – Ralph Waldo Emerson